Finish up earning the Orange Petal and begin working on the Purple Petal “Respect Myself and Others.”  Have a small Valentines Celebration.

The Zinkie Project was our Responsibility Project that we handed out at the end of the last meeting (see two blogs ago). I’m going to go ahead and share some of the stories of what happened with those poor little Zinkies.

Two days before our meeting, I got a frantic email from one of the moms. Her daughter had lost her Zinkie, maybe the dog had eaten it, and where could she buy another one? I called my co-leader so that we were on the same page on this only to find out her daughter had lost hers as well. My co-leader’s daughter had been playing with it the first night, her mom warned her that she was going to lose it if she didn’t put it away, but her daughter decided to play with it anyway and it was now missing.  My co-leader refused to help her find the Zinkie.

To the mom of the email, we asked her not to replace the Zinkie. We told her that her daughter wouldn’t be the only one who lost it and wouldn’t be made to feel bad about it, but part of the lesson was that it was the scout's responsibility and if she lost it then the consequence was that she didn’t have it any more. The mom seemed to accept this without a problem.

In the end, three of eight girls lost their Zinkie.

My daughter didn’t, but I’ll share her story and you can decide if it was cheating. My daughter was playing with her Zinkie, made her a paper house and paper food. When she was talking about keeping it safe so she didn't lose it I suggested she put it in her doll house which she did. Five days later, (on the day of the meeting) my then five year-old had completely forgotten this conversation and had no idea where the Zinkie was. I told her to look in the doll house where, low and behold, it was still resting.

So, I guess, I helped my daughter keep track of hers Zinkie. Really, it was a very hard project for a kindergartener (though two of the girls who lost it were first graders). I recommend doing it with a toy that’s a little bit bigger.

A happy coincidence was that at our Valentines Day meeting we were also doing Gloria the Morning Glory, whose leaves are shaped like hearts. When the girls first came in they each had a pile of green squares and I showed them how to fold them in half and make them into heart-shaped leaves to use for later.


Draw what you did with Zinkies

When and if they finished the leaves, the girls were given construction paper and encouraged to draw her Zinkie and what she did with them this week (even if they lost them).

The Promise Leader led the Girl Scout Promise and then we went around the circle saying what Zinkie they had and what their name was. They showed their Zinkie or the picture they had drawn. The girls were encouraged to talk about how hard it was to keep track of their Zinkie, how they lost them or how they kept track of them.

Thankfully, none of the girls who lost them seemed ashamed or upset. They readily admitted that they lost them and how hard it was.

We passed out snack (heart shaped Rice Crispy Treats) and read the girls “A Surprise for Lily” the Gloria the Morning Glory Story which is about the flowers practicing good hygiene and self-care before going to a party and about  respecting their host by being polite and on time.
After the story, we talked about what “Respect” means.  I’ve found that most kids (even teenagers) can’t define respect.  It’s a term thrown at them often, but they don’t really understand it.  Unsurprisingly my girls couldn’t either.  Their closest answer was “it means being good.”

If someone has another good way of explaining it I’d love to hear, because I’ve been struggling with the definition for years.

We figured Charades would be a fun way to talk about the ways girls their age can respect themselves.  Then for extra fun we added a second round of things “not to do” when you respect yourself.

The girls took turns with the “dos” first.  (We left the “don’ts” as a surprise).  They were hesitant and shy at first, but by the third girl they were fighting for who got to go next.  The leaders helped by reading the slips to the younger girls and giving the girls ideas if they needed them.  The girls were a bit embarrassed to do the “don’ts,” but they were jumping up and down with excitement by the end.


Make Gloria the Morning Glory (1/2 girls at a time)

Gloria was perhaps the most complicated flower to make.  I had some premade pieces for the girls if they balked on the fancy cutting, but I was happily surprised at how well they did.

Meeting Steps:
1.      Leaves as stated in Gathering.
2.      Pass around pictures of Morning Glories. Discuss how they are vines unlike the other flowers.  (And weeds as my co-leader insists. They’ll grow any where).
﻿
﻿

3.      Have each girl glue a windy path for the vine then glue on the yarn.
4.      Pass out the pieces of tissue paper and while the girls are gluing the vine go to each girl and help them cut the tissue paper (it’s kinda like cutting out snowflakes).  There are 4 small cuts: two angular at the tip making it a sharper tip and two cutting off the top two corners.

5.     Once all the girls have cut their flowers they can glue the white circle at the top of the vine.  Then unfold the flower and glue it on top.
6.      Glue on eyes and rest of leaves.
7.      Wait until the last possible moment to draw on mouth since it will probably be wet with glue (or cut out mouths instead).

In the Gloria story the Flowers make smoothies as a healthy breakfast.  We thought making smoothies would be a fun activity and way to talk about respecting yourself by treating yourself to healthy snacks.


The girls really enjoyed taking turns putting in the ingredients and pressing the buttons.  At the end my co-leader made a big show of all the girls putting one hand on the top of the blender to keep the lid on.  It was a very cute bonding thing.

The recipes we used were the NickJr Fresh Beat Band Recipes.  The girls found them a bit tart for their taste, especially the berry one.  We used frozen fruit except for the bananas and that smoothie was the far yummier.  I’d recommend using vanilla instead of plain yogurt and as much fresh fruit as you can find. 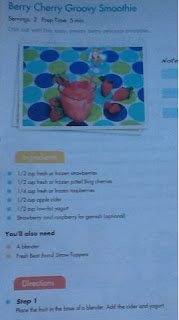 We extended this meeting by 20 minutes so the girls could have a little Valentines Party at the end.  All the girls had brought Valentines for each other.  We laid out red paper lunch bags (cheap at Target, already had them in the house) and a ton of Valentines Day stickers and markers.  Then we let them decorate the bags.

We had a lot of plans for organized delivery of valentines, but in the end it was just a free for all with the girls exchanging valentines (not unlike SWAPs at camp I now know) and putting them in each other's bag.

At the end, we had Valentines Day cupcakes (baked enthusiastically by my daughter) and fun was had by all.


The girls went home with their Gloria worksheet, permission slip for next weeks Tae Kwon Do Field trip, their valentines, and their orange petal.

Posted by OCD Girl Scout Leader at 9:49 AM